skip to main | skip to sidebar

Mary, changed me as a person. When I first started track at Memorial, I didn’t know what it meant to want something. To have a passion or a desire for something so badly, you would work at all costs and sacrifice time and friends to reach that goal. For me, Mary epitomized all of that. She showed me what it meant to be a true champion. She pushed me towards a desire for success. Had Mary not been there at every practice, I know that I would not have been so successful in my high school career. I am absolutely positive that I would not have had as much of a drive towards being the best I can be……Tiffany Jones, Madison Memorial High School graduate, WIAA State Long Jump Champion, and current member of the University of Wisconsin Women’s Track and Field Team.

There aren’t words to express how fortunate I have been to have Mary Grinaker as a coach. I learned so many things from her that will guide me in my future career. She boosted my confidence and somehow you managed to get me to focus in my races. Mary helped guide me to an undefeated season in both hurdling events. I’m still trying to understand how I had such a successful season. I broke countless records every week, and ultimately won 2 state championships. I couldn’t have done it without her.……Lindsey Biel, Madison Memorial High School, WIAA State 100 and 300 meter Hurdle Champion, and former member of the UW Women’s Track and Field Team.

As her former college coach and later having her on my staff at Wisconsin, I have had a great admiration and respect for Mary since 1977. As a young student-athlete, Mary showed leadership qualities right away, and she was so talented in so many different events. Mary and I share a strong bond of precious memories filled with highlights such as her junior year when she won two back to back indoor and outdoor Big Ten titles in the pentathlon and later as part of the Wisconsin coaching staff, when our teams won Big Ten triple crowns or in an unforgettable Big Ten battle when we took the title by one point. Mary and I worked as a team for likely the most successful and enjoyable 10 years of University of Wisconsin Women’s Track and field….

Mary was a wonderful coach at Smith College. She was technically superb-with up to the minute developments in track and field coaching and technique as well as being very creative in adapting new approaches to the different levels of athlete that she encountered. She is a terrific motivator. Her enthusiasm and great sense of humor turned even the hardest training into fun. So successful was Mary in developing the team that Smith College raised the funding to build a fine outdoor track and one of the best indoor track facility in the northeastern US. There are several classes of alumnae who remember Mary with the greatest affection and thanks for the impact she had on our athletics and our lives at Smith College….Peter deVilliers, Sophia and Austin Smith Professor of Psychology, Smith College

I have been in this field for over 35 years, and have yet to work with a person whio is more skilled in program administration than Mary is. Her attention to detail and commitment to competence is unique. Mary’s work ethic is amazing. She is more knowledgeable than most about the NCAA and certainly her sport. Mary is one in a million in this category…..Eugene Long, former Head Coach of Track and Field, Hamilton College.

She’s the bomb. Crazy talented, and a blast to be around. ….Karin Lee George,

Former athlete at Smith College, has trained with Mary for years as a marathoner.

Mary is an A Player, she is a rock star and she is going to whipyou into shape. Whether you and in great shape already, or whether you are completely out of shape Mary will add value to your life and will solve every single problem that you have!!!....John Burke, Trek Bicycles. 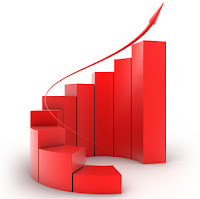 When you make one change in your life, all aspects of your life are influenced. When you start exercising, you may find you sleep better, crave healthier foods and have better moods. All of which, in turn, make exercise easier. At Upward Spiral Fitness we start slowly by changing one behavior and as the spiral turns we add more.
The beauty is that the results are guaranteed - it's a law of nature. If you reward your body with exercise, your body will adapt and get leaner and stronger. You will be mentally calmer and more focused.
We work with all types of individuals from beginners to competitive athletes, from high school age to senior citizens! Our mission is to provide each participant with an efficient, safe and successful exercise program that optimizes your quality of life and fits into your busy schedule! 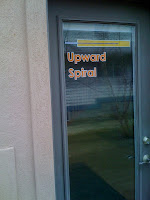 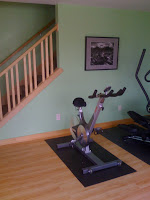 We are located at 5529 Surrey Lane, in the Westport sub-division of Carriage Ridge. The Upward Spiral studio is equipped with the latest in cardio and free weights. We have ample room for functional exercise work as well. There are shower facilities available for those that may need to dash off to the office post-workout! 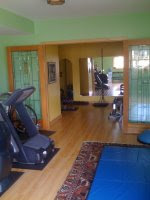 Training at the Spiral

Resistance training at the Spiral uses minimal equipment: stability balls, elastic tubing, dumbbells, medicine balls, or simply your own body weight.   All the exercises can be easily done in your own home, in a relatively small space. You don't need to have expensive equipment!   We strongly believe in “functional training” --connecting the dots between the fingers and toes.  Exercising in a manner that reflects real life movements.  We exercise in all planes of movement to recruit stabilizing muscles and activate your “core.”  We train our clients the way the body is designed to move.  What does this means for you?  You may feel better on the bike or stronger on the run.  You may feel more balanced and able to impart more power into your golf swing.  You will be more comfortable and graceful taking the stairs, pruning trees and mowing the lawn, shoveling snow or simply bending, twisting and lifting your child into a car seat!
Home
Subscribe to: Posts (Atom)

Mary Grinaker
Middleton, WI, United States
Mary’s professional coaching career began at Smith College in Northampton, MA where she founded and coached the Track and Field and Cross Country teams. At Smith, she coached several All-Americans and six national champions. While at Smith, Mary earned her MS in Exercise Physiology and did extensive work with running economy and sub-maximal exercise. In 1991, Mary returned to her alma mater University of Wisconsin-Madison and was the Assistant Coach of Track and Cross Country under legendary distance coach Peter Tegen. During her tenure there, the University of Wisconsin teams topped the Big Ten Conference, boasted 21 National Champions, and won 90 Big Ten Individual and Relay Championships. In 2002, Mary joined the staff at Madison Memorial High School and the team won it’s first State Track championship since 1979. As a competitor, Mary ran for the University of Wisconsin and was a multi-time Big Ten Conference pentathlon and long jump champion. She bicycle raced thru-out her time on the East Coast, and has taken up master’s swimming in the past few years. She is also an avid skier and golfer